Power is intoxicating. Everyone loves having the ability to make their decisions into reality — to think "this should be something that happens," and then actually be able to make that thing happen.

It is also dangerous.

And it is especially dangerous when applied to four-year-olds.

Four-year-olds lack the experience to wield power responsibly. They have no idea what to do with it or how to control it. 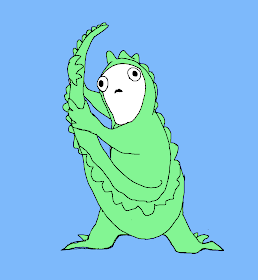 The dinosaur costume was the greatest thing that had ever happened to me. The previous Halloween, which was the first Halloween I could actually remember, my parents had dressed me as a giant crayon, and the whole experience had been really uncomfortable for me.

But being a dinosaur felt natural.

The feeling had been slowly intensifying ever since I put the costume on that morning, and, as I stood there in the middle of the classroom, staring off into the distance in an unresponsive power trance, it finally hit critical mass.

I had to find some way to use it. Any way. Immediately.

The other children screamed and fled. The teacher chased me, yelling at me to stop. But I couldn't stop.  I was a mindless juggernaut, a puppet for forces far greater than myself. I had completely lost control of my body.

All I knew was that being a dinosaur felt very different from being a person, and I was doing things that I had never even dreamed of doing before.

Of course, I had always had the ability to do these things — even as a person — but I didn't know that. I'd just assumed that I was unable.  As a dinosaur, I didn't have any of those assumptions.  It felt like I could do whatever I wanted without fear of repercussions.

The repercussions were also exactly the same as they were before I became a dinosaur.

I just experienced them differently.

My parents had to come pick me up at noon that day.  The teacher explained that it must have been all the Halloween candy.  "Some kids really can't handle sugar," she said.  "It turns them into little monsters."

I suppose it was a reasonable enough conclusion, but it only served as a distraction from the real problem.

The thing about being an unstoppable force is that you can really only enjoy the experience of being one when you have something to bash yourself against. You need to have things trying to stop you so that you can get a better sense of how fast you are going as you smash through them. And whenever I was inside the dinosaur costume, that is the only thing I wanted to do.

The ban on sugar provided a convenient source of resistance. As long as I was not supposed to eat sugar, I could feel powerful by eating it anyway.

I'm sure the correlation started to seem rather strong after a while. I'd find some way to get sugar into myself, and then — drunk on the power of doing something I wasn't supposed to —I would lapse into psychotic monster mode. To any reasonable observer, it would appear as though I was indeed having a reaction to the sugar.

My parents were so confused when the terror sprees continued even after the house had been stripped of sugar. They were sure they had gotten rid of all of it. . . did I have a stash somewhere? Was I eating bugs or something?

They still weren't suspicious of the costume.

I lost weeks in a power-fueled haze. I often found myself inside the costume without even realizing I had put it on. One moment, I would be calmly drawing a picture, and the next I'd be robotically stumbling toward my closet where the dinosaur costume was and putting myself inside it.

It started to happen almost against my will.

Surely my parents made the connection subconsciously long before they became aware of what was really going on. After weeks of chaos, each instance punctuated by the presence of the costume, I have to imagine that the very sight of the thing would have triggered some sort of Pavlovian fear response.

They did figure it out eventually, though.

And the costume was finally taken away from me. 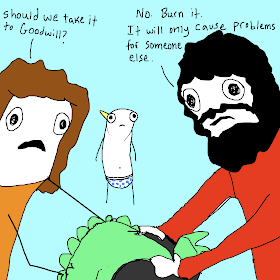 I was infuriated at the injustice of it all. I had become quite dependent on the costume, and it felt like part of my humanity was being forcibly and maliciously stripped away.  I cursed my piddling human powers and their uselessness in the situation. If only I could put on the costume . . .  just one more time.

But that was the costume's only weakness — it couldn't save itself. I had to watch helplessly as it disappeared inside a trash bag.

There was nothing I could do.

And so my reign of power came to an end, and I slowly learned to live as a person again.