I woke up really early on Wednesday morning for no reason.  In retrospect, I can see it was probably my body's way of telling me that I might die later that day, so I better get the hell up and start enjoying the shit out of life.

My life that morning was not particularly enjoyable.  I felt like my internal organs had been punched by someone who is really enthusiastic about punching and therefore punches a lot.  In fact, they love punching so much that when they finished punching my internal organs, they moved on to punching my skin and all my muscles and also my eyes. 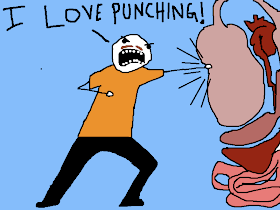 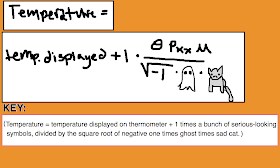 The thermometer read 102.3, so by my calculations, I was running a fever of about 103.5.  I took a couple aspirin and tried to get some work done.  That's when I wrote/illustrated this post.  I may have also responded to a few emails.  If you got an email from me last Wednesday that didn't make a lot of sense, I apologize.  I wasn't drunk.  I was just very ill.

I eventually gave up on trying to be responsible and just sat on the couch staring off into space really intensely. 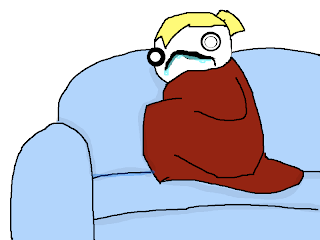 That evening, my friend called to ask me if I'd like to meet her and another friend for drinks.  I didn't feel much like drinking, but I was feeling a little better and I'm almost tragically impulsive, so I was like "heck yeah I'll meet you guys for drinks!" Then I staggered into the bathroom to try and clean myself up enough to go out in public. 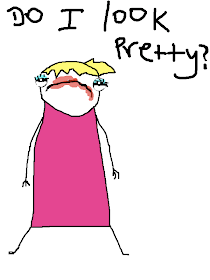 At the bar, I ordered tea because I was really, really cold and even though I'm impulsive and irresponsible, I know enough not to complicate illnesses with alcohol.  The bartender looked at me like I was the first person ever to order raspberry tea in a bar.

I was able to enjoy my tea for approximately five minutes before I started to feel emergency-nauseous and had to run to the bathroom. The next little bit is kind of a blur for me. I know that I passed out in the bathroom. I don't know how long I was out, but my first thought upon waking was "OH MY GOD I HAVE A BRAIN TUMOR!!!!!! I KNEW IT!!!" 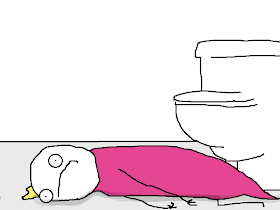 I knew I should probably go to the hospital, but I'm still too poor for insurance, so I tried to convince myself that I was okay and I should just crawl home and sleep it off.  I tried to stand up, but I ended up head-butting the wall and crumpling to the floor again.  I lay there on the ground staring at some graffiti that just said "poop poop poop poop poop."  I started wondering whether that would be the last thing I ever saw.  It was a depressing thought for a few reasons.

After several more unsuccessful attempts at getting to my feet, I finally made it.  I used this as an excuse to not go to the hospital.  "Hey, look at me!" I thought.  "I'm doing great! 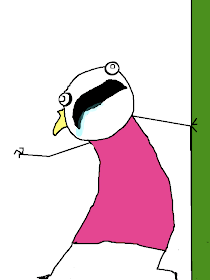 I staggered out of the bathroom and toward my friends.  I remember my limbs making all sorts of spastic movements as I tried to glide along and look like nothing was wrong.  I ran into the wall and ricocheted off into the other wall.   It felt like I was competing against my need to go to the hospital:  if I could stay upright, it meant I was fine and goddamn it, I was not about to lose that game and give up the entirety my newfound income just to make sure I wasn't dying.

I finally made it back to the bar and collapsed onto it.  That's when I lost the game and decided to go to the hospital because I was legitimately scared of dying.  That's also where things get hazy again.  I remember the next 20 minutes in little clips.  There's me lying face down in a puddle on the bar, blowing little bubbles in it while trying to breathe.  Then I'm being carried out of the bar.  Then I'm being driven to the hospital.  I was breathing really fast; I remember that because once we got to the hospital, the intake nurse kept yelling at me to slow down my breathing and I couldn't.  My entire body was shaking convulsively and I felt more cold than I have ever felt in my life.  My blood pressure was 70/35.  When I caught a glimpse of those little numbers on the screen, I immediately regretted ever knowing anything about medicine because my knowledge only contributed to making me feel positive that I was going to die.  "Well," I thought, "this is it.  My last words are going to be 'fuck you, I can't breathe any slower!'"  It was all very dramatic. 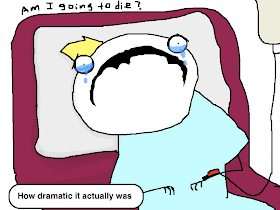 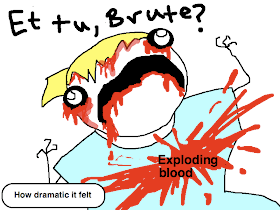 As is often the case with medical emergencies, it was not immediately apparent what was wrong with me, so the doctor called for tests. Lots and lots of tests.

Blood samples are easy because they are passive.  You just lie there and let the nurses stick needles in you until they are done.  But urine tests require your active participation.  When you are in the throes of death like I was, providing a urine specimen is a veritable quest.  I could have rewritten The Iliad about my experience peeing into a cup.

I was still having a lot of trouble maintaining consciousness, so the doctor had to supervise me in the restroom.

I knew I had reached a pretty low point in my life.  There I was, halfway unconscious on a toilet; trying my hardest to pee into a tiny plastic cup and not on my own hand or the floor.  It sounds like a very simple goal to accomplish, but it isn't. I was crying quietly and drooling on myself.  I didn't even care that a stranger was standing there watching the whole pathetic situation. In that moment, I had no dignity. 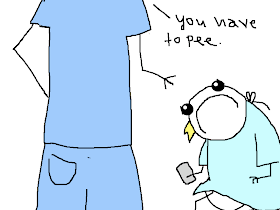 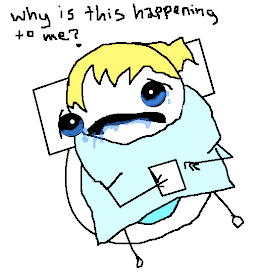 Despite my herculean efforts, the urine test didn't tell them anything.  The blood test showed a slightly high white blood cell count, but other than that, it was normal.  The only thing that even hinted at what could be wrong with me was my heart.  After looking at my EKG, the doctor was like "Your heart is being weird." And I was like "Why is it doing that?"  And the doctor was all "I don't know."

Four hours later, I wasn't dead and the doctors still couldn't figure out what was going on, so they sent me home.

As I'm sure is the case with many of you, I walk that thin line between hypochondriac and a normal level of concern about my health.  So when I go through a terrifying medical saga only to come out the other side with a tentative diagnosis of "weird heart," I panic a little.

The past week has basically just been a string of moments in which I feel almost positive that I'm going to die.

I still don't know what is wrong with me, but I'm definitely not dead and I'm feeling a lot better, so that's good. 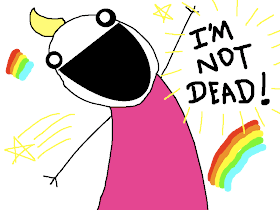