I woke up today and immediately got sucked into my forum.  I was so busy posting graphs, drawing dinosaurs and discussing whether a centaur or a minotaur would win in a battle to the death that I didn't look in a mirror until about 45 seconds ago.  This was probably a mistake.  Or an attempt at self-preservation.  One of those.

Anyway, I just looked in the mirror and this is what I saw: 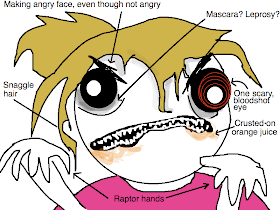 
Let's look at this awesome graph I made comparing centaurs and minotaurs instead: 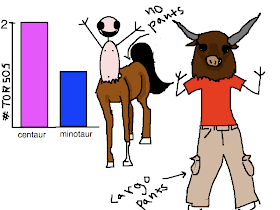 I wish I could do that in real life.  Like, if Boyfriend walked in and was like "Wow, you look pretty today" in a tone of voice that means "Holy crap, what am I doing with my life?"  I could just be like "Hey!  Check out this sweet drawing!"  And he would forget about doubting his future.

UPDATE:  EXPERIMENT FAILED.  I drew this picture to test my hypothesis in real life: 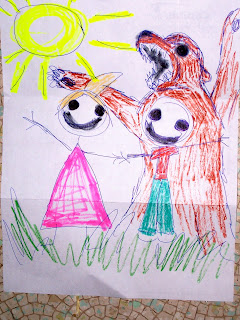 When Boyfriend walked in, I held the picture up next to my face.  He was like "What are you doing?"

Boyfriend:  "Why is there a bear attacking me?"

Me:  "What's it supposed to do?  It's a bear.  That's how bears express their emotions."

Boyfriend:  "What did you draw that on?"

Me:  "Well,  maybe you shouldn't leave your important documents on the floor."

Boyfriend:  "Maybe you shouldn't draw bears on a piece of paper before checking to make sure that the piece of paper isn't actually an important document."